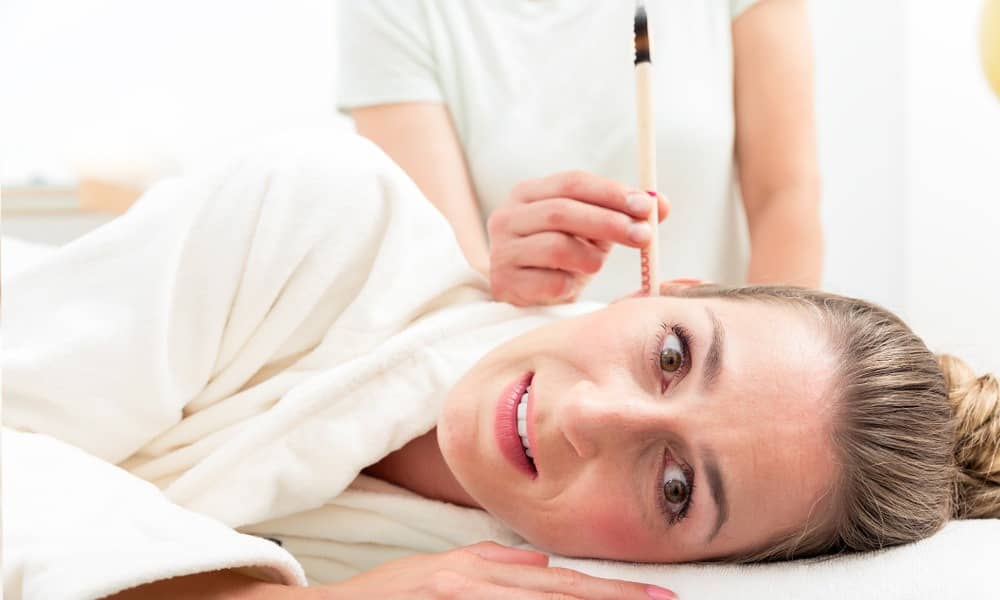 Also known as ear cones or auricular candles, ear candles are hollow tubes made from linen or cotton that have been wound into a cone and lined with beeswax, paraffin or soy wax and allowed to harden. The pointed end is then inserted into the ear, while the wider end is lit.

Advocates for ear candling claim that the warmth from the flame causes a vacuum effect, pulling earwax and other impurities from the ear canal and into the hollow candle. Others still insist that the heat from the candle melts the wax inside the ear, which in turn falls out over the coming days.

What is it supposed to treat?

Supporters of ear candling assert that they can treat the following:

Sounds too good to be true, right? That’s because it most certainly is. The scientific consensus around ear candling is unambiguous – if not devastating – in its conclusions. So, what are they?

What does the science say?

Unfortunately for those who argue for it, ear candling is just as dangerous as over-the-counter earwax removal tools. Indeed, it’s more in line with acupuncture or homeopathy than real medical practice.

Proponents assert that by lighting the candle, a vacuum is created which removes earwax. The problem, however, is that when earwax is compacted, it is hard, sticky and difficult to remove. Put simply, it requires a great deal of suction to actually work; candling does not provide the requisite amount. According to a study by Seely, Quigley and Langman in 1996, it actually provides no suction at all. A far more effective method is microsuction, which you can read about here.

Candles do not drain the system

The ear drum does not allow for the supposed transmission of fluid and gas between the various parts that make up the inner ear. Of course there are arteries, veins, lymph systems and neural networks at play, yet there are no ‘empty’ interconnecting passageways to allow for the alleged transfer of dirt and wax.

It is unsafe and invasive

The number of complications that arise from ear candling far outweigh any imagined benefits. These include:

Seely, Quigley and Langman also extensively compared patients’ ear canals before and after candling and discovered that there was no reduction whatsoever in the amount of earwax found. If anything, they found that some participants had been left with candle wax deposited in their ears. Moreover, the heat funnelled into the ear was purported to cause pain and discomfort in a variety of patients.

Jackie Clark, PhD and associate professor at the School of Behavioural and Brain Sciences at UT Dallas puts it rather damningly:

“Ear candling is dangerous (even when used as directed by the manufacturer) and serves no legitimate purpose and there is no scientific evidence showing effectiveness for use. It is of significant concern that some ear candles are advertised for use with children (including babies), potentially placing them at great risk—with no known or documented benefit.

As hearing professionals and doctors, we strongly recommend prior to undertaking ear candling, consumers and patients are urged to discuss the matter with their physician, audiologist, or hearing aid dispenser. Bottom line: Ear candling is ineffective and potentially dangerous, and we do not recommend it at any time for any reason.”