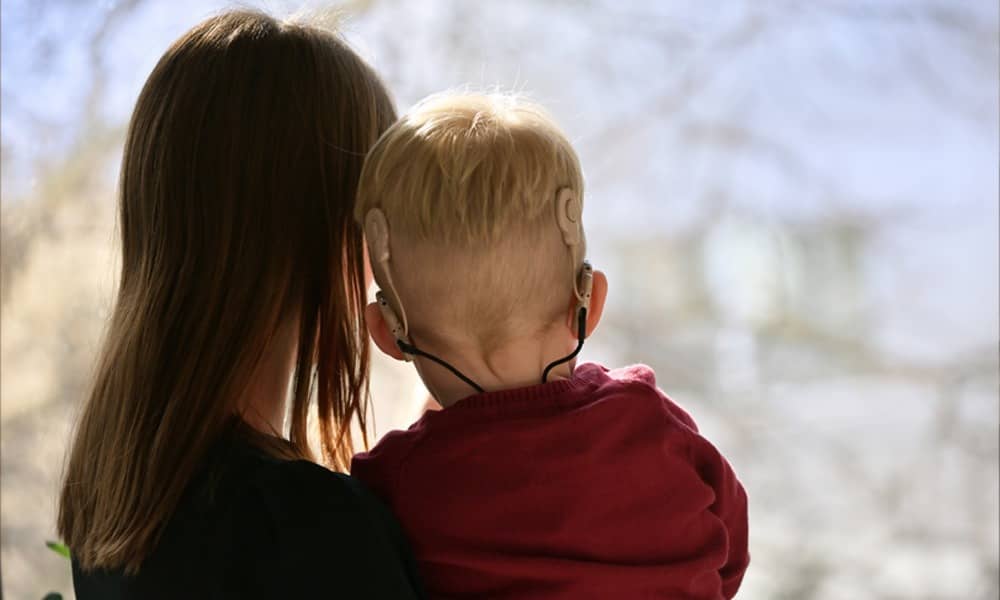 Hearing loss can be a relatively common issue for newborn children; among the varying types, auditory neuropathy spectrum disorder (ANSD) is perhaps one of the most disruptive. It occurs when the signal between the inner ear and the brain becomes distorted.

Although the direct reasons for ANSD are not well understood, it can affect premature children and those with a strong hereditary history of the condition more often. Although signs can begin at any age, the vast majority of those who have ANSD are born with the condition and come to be diagnosed within the first few months of life.

As research into the disorder becomes better and better, the number of children diagnosed with it is ever greater. Nowadays it accounts for between 10 to 15% of all hearing loss diagnoses.

Fortunately, children who have ANSD can still acquire strong communication and language skills with the help of therapy, medical devices and visual communication techniques. Robust early diagnosis and intervention are integral to the long-term treatment of the condition, so it is highly recommended that if your child has any difficulty hearing whatsoever that you contact your GP or one of our specialists immediately. 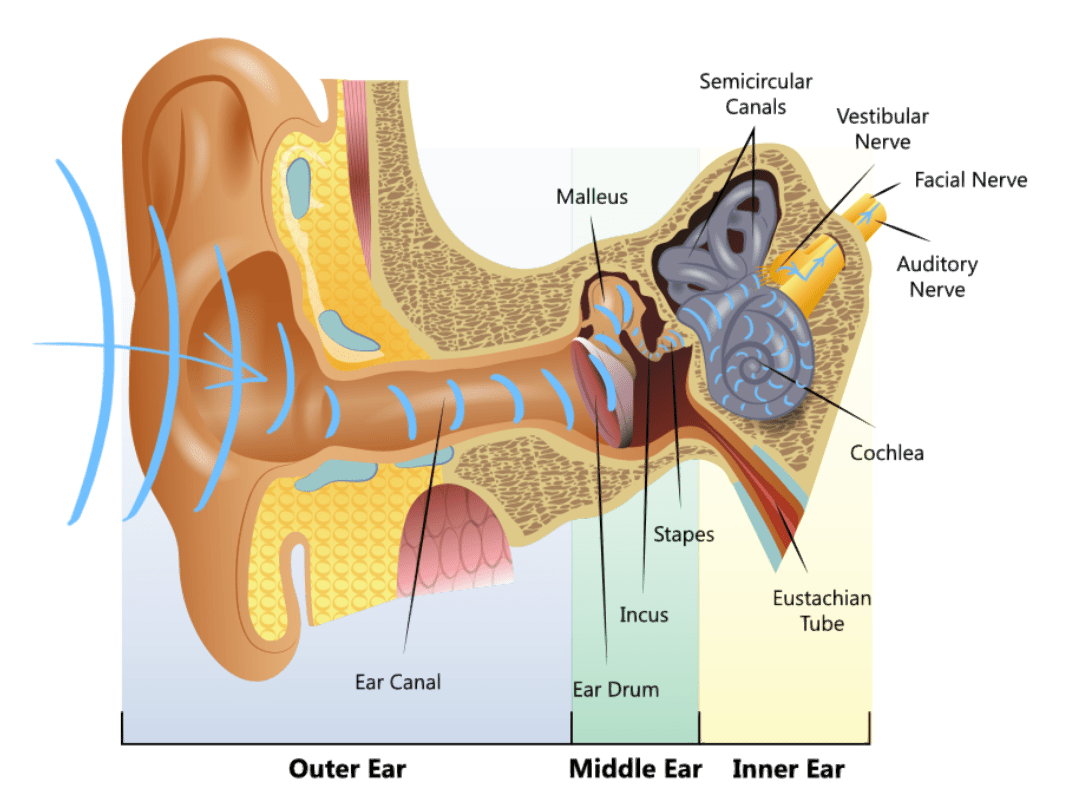 Above you can see a detailed diagram of how normal hearing function works. Sound waves travel from the air to the outer ear, through the ear canal to the middle ear. At this point, the sound causes the eardrum to vibrate, while the three tiny bones (collectively referred to as Ossicles, these include the Malleus, Stapes and Incus) boost these vibrations and carry them on into the inner ear.

The inner ear is composed of a snail-like chamber called the cochlea. The cochlea is filled with liquid and lined with minuscule hair cells: when vibrations move through it, the outer hair cells oscillate back and forth to amplify the sound. With sufficient vibration, the inner hair cells transform the signal into electrical nerve impulses via the auditory nerve, which bridges the gap between the inner ear and the brain. After the nerve impulses reach the brain, they are interpreted as sound, and the cycle is complete.

What Affect ANSD Has on Hearing

With ANSD sound enters the ear normally, but due to the damage to the inner row of hair cells (or synapses between the cells and the auditory nerve), sound doesn’t transmit to the brain as it otherwise would.

Therefore, the signal that arrives at the brain is scrambled and disjointed, or in some cases doesn’t arrive at all, and as a result, the sound doesn’t make sense to the brain.

Only recently has ANSD begun to be understood and diagnosed, and many questions remain unanswered. This means that as yet, not every newborn hearing screening program can accurately detect it, leaving hundreds and thousands of people insufficiently diagnosed.

Symptoms of ANSD are notoriously inconsistent and can vary wildly from time to time, place to place, mild to severe. Some children, for instance, can hear sounds but have difficulty determining exactly what they are. Others still experience a nullifying effect, wherein all sounds are blurred together into one continuous unidentifiable noise. A voice might sound like rainfall, a road crossing like a foghorn, a cat’s purr like an engine.

Some individuals, though, may improve over time. However, there is no guarantee of this, as others will decline or remain consistent.

What are the causes?

Ultimately, the exact causes of ANSD are not known. However, certain factors appear to increase the chance that a child may suffer from it, including:

What are the symptoms?

There are no guarantees that your child does not have ANSD, even if they pass a newborn hearing screening. Instead, you should remain vigilant over the course of months to really make sure. You should always contact your doctor if your child experiences any of the following:

In the case of the above, your doctor is likely to refer you to an audiologist – someone specialized in the diagnosis and treatment of hearing loss – or an otolaryngologist (a.k.a. an Ear, Nose and Throat or ENT doctor).

Thankfully, nowadays several advanced techniques can diagnose ANSD (aside from the routine newborn screenings) that are suitable for adults as well. These range from Middle Ear Muscle Reflex tests (to see how well the ear responds to loud sounds) to Magnetic Resonance Imaging (MRI) scans to genetic testing. These procedures are painless, and most will not require an overnight stay in the hospital. You can read more about the more sophisticated hearing tests here.

At the moment, there is no known cure for ANSD; however, assistive listening devices (ALDs) can help those with the condition develop language skills and make better sense of sounds. Treatment will vary depending on the severity of the ANSD itself.

Speech-language pathologists are an integral part of using any of the following devices effectively and are key to improving communication techniques.

Some examples of ALD include:

Designed to reduce background noise and makes a speaker’s voice louder so the child can understand it, an FM system consists of a small microphone and a transmitter which sends an electrical signal to a wireless receiver which the child then wears (on the ear or the body). They’re portable and can be helpful in the classroom or nursery.

A hearing aid is an excellent piece of kit that amplifies sounds coming into the ear. They can also help with damaged outer hair cells and replace their amplification. In certain cases of ANSD, hearing aids are paired with an FM system to be effective: however, hearing aids alone are not as useful with ANSD since they only exaggerate the disorganized sounds, rather than clarify them.

A device with both internal and external pieces designed to replace the damaged areas of the ear, a cochlear implant is placed inside the skull through surgery.

The outer part then rests behind the ear, and, with training, therapy and guidance, a child with an implant can learn to communicate effectively.

Do note, however, that implants are not an option until after 12 months old, and even then, ongoing therapy is a crucial component to their success, and they are not suitable for everyone. 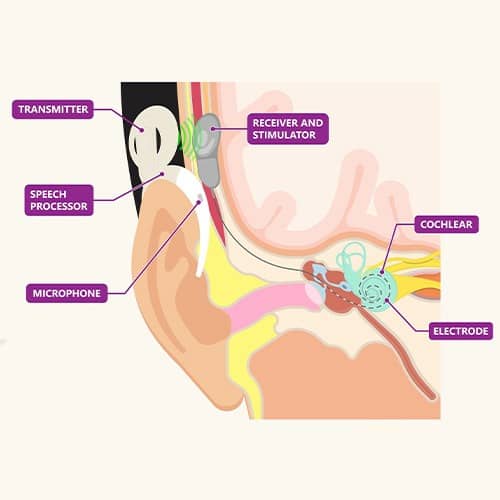 As well as ASL, children with ANSD can also benefit from learning other forms of communication, such as British Sign Language (BSL). This will allow them to learn syntax and sentence structure and can be very useful when dips in ability to understand spoken language occur. It is highly recommended to explore one’s options when it comes to learning BSL and other forms of visual communication – expert medical advice is an absolute must.

Although ANSD is a difficult to manage and inconsistent condition, you shouldn’t lose hope: many hundreds of thousands of people with it still lead happy, fulfilled lives. With new advancements in hearing technology and an ever-increasing knowledge of ANSD, the prospects for children diagnosed with the condition have never been brighter.

Do You Have a Relative Who Doesn’t “Need” or “Want” a Hearing Aid?